I know it’s a bit late for a retrospective on my annual Halloween tradition — the haunted graveyard. But there were a couple additions this year that I thought were worth mentioning, and I have some really excellent photos thanks to the efforts of a good friend so I figured “Better late than never!” For those who haven’t seen my previous articles about the graveyard, let me offer a brief backstory:

After my wife and I inherited her mother’s house several years ago, it became our responsibility to host the annual family Halloween party. Originally the party was intended for my mother-in-law’s adult children and their spouses, but once they started having kids of their own, the party shifted gears. It’s been primarily targeted at the kids as long as I’ve been involved. One of the marquee attractions is the haunted graveyard, where our backyard is transformed from a normal suburban plot into a spooky graveyard replete with zombies, ghosts and other monsters. As the man of the house, and because I have a bit of a macabre streak, it falls to me to design and … execute … the decorations. Every year the graveyard gets a little bit more elaborate as I snatch up more characters at the post-Halloween sales and devise better layouts and designs for the graveyard.

As in previous years, I used a short two-foot tall wooden fence to establish a perimeter for the graveyard. This serves two purposes. First, it provides a pathway for visitors to follow, so they aren’t just meandering through the graveyard. That allows me to better control the experience and ensure that people don’t approach characters from the wrong side. Second, it gives a little protection to the characters, to discourage children from physically abusing the decorations. You can see the fencing here (as usual, click on any of these pictures for a larger version):

Along with the fence you can see one of the architectural improvements in the graveyard: a dividing wall down the middle of the area. This serves to block view of the characters on the second half of the graveyard when you are walking down the first half. I fashioned this out of several pieces of 1 inch PVC pipe and PVC pipe connectors at a total cost of about $20 at the local hardware store. PVC’s a great choice for this because it’s cheap, lightweight and easy to work with — all you need is a hacksaw. It’s also easy to setup and tear down. This diagram shows the dimensions and parts I used to build the frame:

The curtain is made from two black plastic tablecloths, the type you can find at a party supply store around Halloween time. The ends are folded over and stapled together to make sleeves into which the top and bottom PVC pipes can slide. I think the tablecloths cost about $8 each. To be honest the whole thing looks pretty cheap in the daylight, but once it gets dark it doesn’t matter. Next year I’ll probably blacken the PVC with some spraypaint. If I can find some cheap cloth, I’ll redo the curtains as well. If you do build something like this yourself, make sure that the feet are pretty wide, and put something heavy on each to hold it down. Otherwise one good gust of wind will knock your wall right over!

As for new characters this year, I have this creepy-as-hell “deady bear”. For such a small guy, he is surprisingly disturbing. When activated, his head turns side-to-side, one eyeball lights up, he stabs himself with a knife, and he makes seriously unsettling noises. Like most of the characters he’s sound activated:

I’ve also got this “zombie barrel”, who lights up, makes spooky sounds and rises up out of his barrel when activated. To be honest although he’s big and was expensive, it’s not one of my favorite characters. He’s difficult to setup, and he moves too slowly to be really scary:

Unfortunately I don’t have a picture of the third new character — this black jumping spider. This guy is great because he moves quickly, and he’s hard to see since he’s black and starts at ground level. It’s very startling — perfect for somebody coming around a corner.

Besides the partition and the new characters, there was one other upgrade that I’m really pleased with: the flying phantasm. I’ve actually had this character for a couple of years, but usually he just hangs “lifelessly” over the path:

This year I ran a 1/4 inch rope from my second-story roof to the fence at the edge of our property, then attached the ghost to a cheap pulley that I hung on the line:

Once the line was taut, the ghost could “fly” down the line across the pathway, low enough that his tattered robe would brush against the head and shoulders of anybody walking by. Triggering the ghost was about as low-tech as it gets: somebody would watch from a second floor window behind the ghost and release him at suitable moments; a bit of string tied to his back allowed my cohort to pull him back up in preparation for the next run. After dark, the flying phantasm was a huge hit, even scaring some of the adults who went through the graveyard! Here’s a video of the daytime test run; you can see where I’ve got a bit of extra rope tied around the line to serve as a stop so that he doesn’t go too far:

That’s about it for new features this year. Overall I think this goes down as another success, but there are some things I’d like to improve for next year:

Hope you enjoyed this post mortem! To wrap up, here are some pictures of the graveyard after dark — credit goes to my good friend Tim Murphy, who took most of the pictures used in this post, and who was a tremendous help in setting up the graveyard. See you next Halloween! 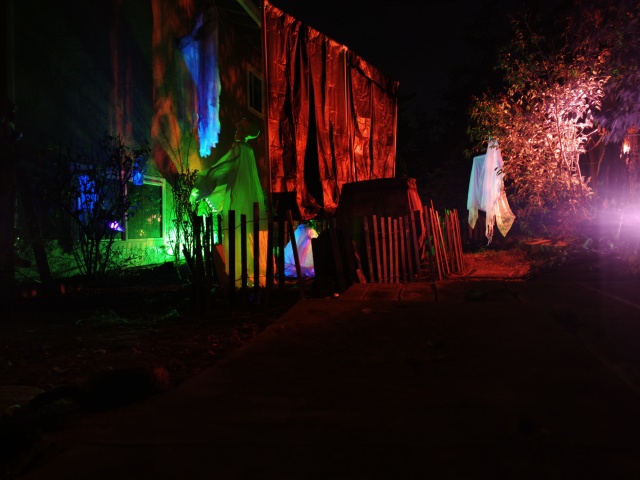 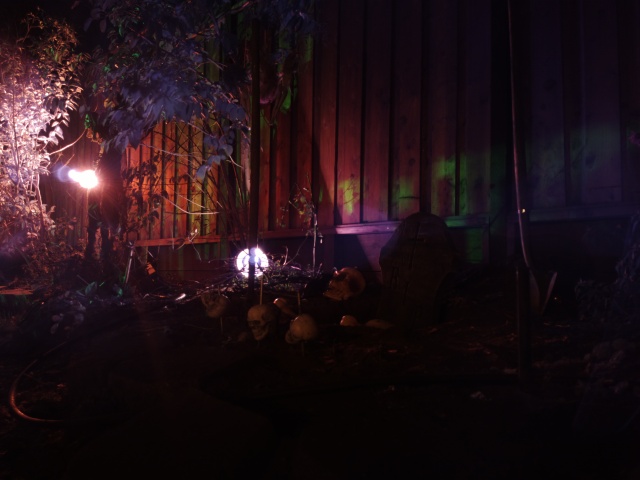 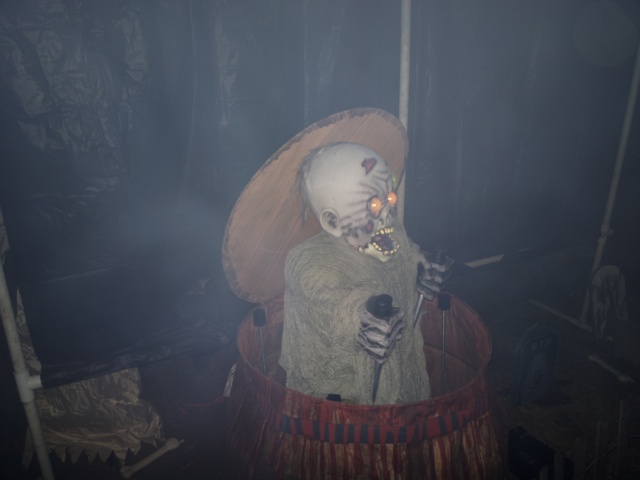