Somebody asked me the other day what portion of the Electric File System (EFS) is shared code versus platform-specific code. The EFS, if you don’t know, is a custom filesystem driver and part of ElectricAccelerator. It enables us to virtualize the filesystem, so that each build job sees the correct view of the filesystem according to its logical position in the build, even if jobs are run out of order. It also provides the file usage information that powers our conflict detection algorithm. As a filesystem driver, the EFS is obviously tightly coupled to the platforms it’s used on, and the effort of porting it is one reason we don’t support more platforms than we do now — not that a dozen variants of Windows, 16 flavors of Linux and several versions of Solaris is anything to be ashamed of!

Anyway, the question intrigued me, and I found the answer quite surprising (click for full-size):

Note that here I’m measuring only actual code lines, exclusive of comments and whitespace, as of the upcoming 6.1 release. In total, the Windows version of the EFS has about 2x the lines of code that either the Solaris or Linux ports have. The platform-specific portion of the code is more than 6x greater!

Why is the Windows port so much bigger? To answer that question, I started looking at the historical size of the three ports, which lead to the following graph showing the total lines of code for (almost) every release we’ve made. Unfortunately our first two releases, 1.0 and 2.0, have been lost to the ether at some point over the past ten years, but I was able to collect data for every release starting from 2.1 (click for full-size):

Here you can see that the Windows port has always been larger than the others, but it’s really just a handful of Windows-specific features that blew up the footprint so much. The first of those was support for the Windows FastIO filesystem interface, an alternative “fast path” through the kernel that in theory enables higher throughput to and from the filesystem. It took us two tries to get that feature implemented, as shown on the graph, and all-told that contributed about 7,000 lines of code. The addition of FastIO to the filesystem means that the Windows driver has essentially three I/O interfaces: standard I/O, memory-mapped I/O and FastIO. In comparison, on Linux and Solaris you have only two: standard I/O and memory-mapped I/O.

The second significant difference between the platforms is that on Windows the EFS has to virtualize the registry in addition to the filesystem. In the 4.3 release we significantly enhanced that portion of the driver to allow full versioning of the registry along the same lines that the filesystem has always done. That feature added about 1,000 lines of code.

I marked a couple other points of interest on this graph as well. First, the addition of the “lightweight EFS” feature, which is when we switched from using RAM to store the contents of all files in the EFS to using temporary storage on the local filesystem for large files. That enabled Accelerator to handle significantly larger files, but added a fair amount of code. Finally, in the most recent release you can actually see a small decrease in the total lines of code on Solaris and Linux, which reflects the long-overdue removal of code that was needed to support legacy versions of those platforms (such as the 2.4.x Linux kernel).

I was surprised as well by the low rate of growth in the Solaris and Linux ports. Originally the Linux port supported only one version of the Linux kernel, but today it supports about sixteen. I guess this result reveals that the difficulty in porting to each new Linux version is not so much the amount of code to be added, but in figuring out exactly which few lines to add!

In fact, after the 4.4 release in early 2009, the growth has been relatively slow on all platforms, despite the addition of major new features to Accelerator as a whole over the last several releases. The reason is simply that most feature development involves changes to other components (primarily emake), rather than to the filesystem driver.

One last metric to look at is the number of unit tests for the code in the EFS. We don’t practice test-driven development for the most part, but we do place a strong emphasis on unit testing. Developers are expected to write unit tests for every change, and we strive to keep the tests isomorphic to the code to help ensure we have good coverage. Here’s how the total number of unit tests has grown over the years (click for full-size): 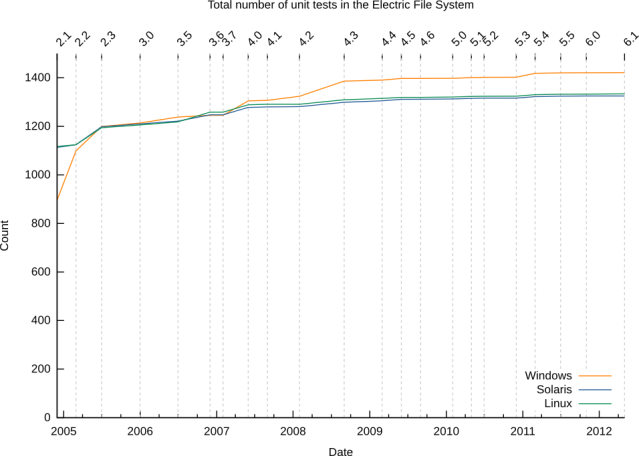 Thankfully for my credibility, the growth in number of tests roughly matches the growth in lines of code! But I’m surprised that the ratio of tests to code is not more consistent across the platforms — that suggests a possible area for improvement. Rather than being discouraged by that though, I’m pleased with this result. After all, what’s the point of measuring something if you don’t use that data to improve?