Earlier this month, Electric Cloud hosted the fourth annual Electric Cloud Customer Summit. By any measure it was a fantastic success, with more people, more content, and lots of enthusiastic and intelligent customers. I thought it would be fun to look at some statistics from this year’s event.

How many people showed up?

The most obvious metric is simply the count of attendees. In 2011, there were 146 attendees (excluding Electric Cloud employees). That’s literally double the number that showed up for the first summit in 2008: 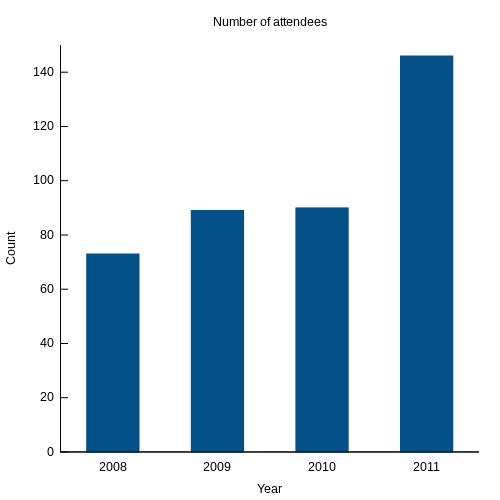 This was the first summit for the majority of those present, but a significant minorty — nearly 25% — had been to at least one previous summit. Several are “Summit All-Stars”, having attended all four!

Another way to measure the growth of the summit is to look at the number of presentations each year, and the proportion of those that were given by customers or partners, rather than by Electric Cloud employees. In 2011, a healthy 40% of the presentations were given by customers and partners, including two panel sessions, and a keynote from GE about how Electric Cloud enabled the transition to agile development: 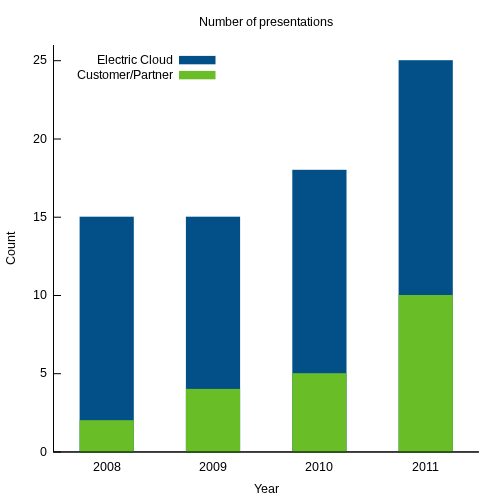 Where did they come from?

The vast majority of participants were from the United States, but several braved international travel to attend. Here are the countries represented:

Within the United States, 14 states were represented:

How many companies were represented?

This year’s summit was a fantastic place to network, with nearly 60 companies represented, across a wide range of industries. This tag cloud shows the industries, scaled by the number of people from each:

When did attendees register?

I thought it might be interesting to see how far in advance people registered for the summit. It’s not surprising that there’s a spike the week before, although the magnitude of the jump is less than I expected. In fact, less than 25% of the registrations occurred the week before and the week of the summit:

I had a lot of fun at the 2011 Customer Summit. It was great to finally put faces to the names of people I’ve collaborated with, sometimes for years before meeting face-to-face. And it was a pleasure to see so many familiar faces as well. Here’s hoping the 2012 summit is just as fruitful.

One final thought: if you have any suggestions for additional statistics that might be interesting here, let me know in the comments.

2 thoughts on “Electric Cloud Customer Summit 2011 by the Numbers”