I’ve been playing with a new visualization for build data. I was looking for a way to really hammer home the point that in most builds, the vast majority of jobs are more-or-less the same length. The “Job Count by Length” report in ElectricInsight does the same thing, but in a “just the facts” manner. I wanted something that would be more visceral.

Then I struck on the idea of mapping the jobs onto a surface plot, using the job duration as the z-coordinate or “height”, so longer jobs have points high above the z-axis. In such a view, we would expect to see a mostly flat plain, with a small portion of points above the plain. Sure enough, that’s just what we get. Here’s an example, generated using data from a mozilla build: 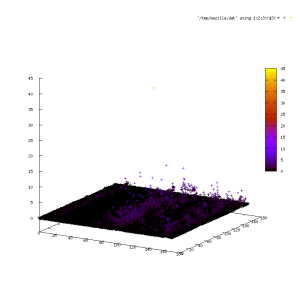 Now, here’s what I don’t like about this visualization:

For comparison, here’s the “Job count by Length” report from ElectricInsight. It uses the same data, and tells the same story, but it’s not nearly as visually dramatic: 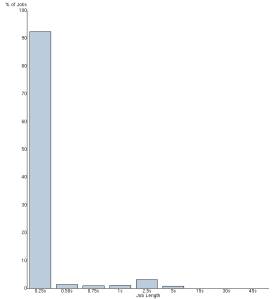 So, what do you think? Any ideas how I could use the X- and Y-coordinates to convey useful information? Keep reading if you want to see how I made this visualization.

How did I make it?

This visualization was really easy to make, because I leveraged other tools to do all of the hard work for me. The first was ElectricAccelerator, which I used to generate an annotated build log containing timing information for every job in my build (you could also use SparkBuild). Next, I used annolib, a library for processing and analyzing annotation files, to convert the data into x,y,z tuples. I wrote this trivial annolib script:

Finally, I took the output of that script and used gnuplot to render it, using this script:

Putting it all together:

5 thoughts on “How long are the jobs in my build?”